No history of the opening or development of the stone quarries at Sandstone has ever been written. Space here forbids anything but a meager outline.

The first opening was made on the river bank about two hundred feet south of the present quarry office, August 22, 1885. At that time the river bank, the bluffs and in fact the whole region was thickly covered with timber and a heavy growth of underbrush. This opening was made by the writer, no other person being then interested in the enterprise. The crew consisted of Daniel Ryan, foreman, John McCoy, Michael McNamara, and John Randal, quarrymen, Orville C. Cox, blacksmith, Michael Logue, cook, and Joseph Thomas, Henry Mapes and James Campbell, lumber jacks, for cutting brush. This crew remained for ten days, two or three days of which were too rainy for work. The first picture of the quarry was taken some weeks later showing however the only opening made and its condition, when the crew was discharged. The stone at the upper right corner, was the first cut in the quarry. During the progress of this work four loads of stone were hauled by team to Hinckley and shipped to St. Paul. Col. R. A. Smith having the honor of hauling the first load and Leavitt Reynolds the second. One large block was sawed by Lauer Bros., and the remainder cut by Matt Breen at his sheds on Court square, St. Paul, and all exhibited at the state fair, where they attracted much attention.

For the purpose of introducing the stone the quarry was opened during the following winter, giving employment to about thirty men, and 232 car loads were quarried, hauled to Sandstone Junction, and from there shipped to St. Paul, Minneapolis and Stillwater, during the summer of 1886. Meantime the Kettle river railroad was constructed from the quarry to the St. Paul & Duluth track and shipments of stone commenced December 1, 1886.

About November 1, 1885, John P. Knowles became a partner with the writer in the enterprise and so remained until the quarry was finally sold. In December, 1886, the Kettle River Sandstone company was incorporated with a capital stock of $200,000, the stock of which was owned by the writer, John P. Knowles, Fred A. Hodge, James Hurley, and W. H. Grant, Jr. This company never operated the quarry, but soon after leased it to Ring & Tobin, who erected a four gang sawmill and operated the quarry extensively until it was closed on account of the panic in 1893. During 1887, 1888, and 1889, the quarry was worked on a large scale, often giving employment to more than four hundred men. The great fire of September 1, 1894 having destroyed the mill and all other property in the quarry except the office and powder house, The Minnesota Sandstone company succeeded to all other interests. The present capital stock of the company is $100,000. It gives steady employment to three hundred and fifty men, and last year shipped two hundred and ninety car loads of stone. The shipments for the first six months of the present year have been one thousand seven hundred car loads. 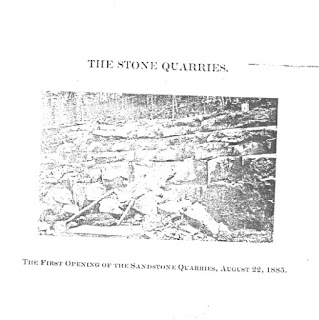 Researched and written by LaJune Troolin

Sand Creek Community - Sandstone Township, east of Sandstone - After logging operations stopped, Kock & Company of Chicago bought up miles of land and started advertising that the land would be perfect for farming. Scandinavians began to buy up the land and formed a small community around Sand Creek. The first school was held at Svardal's home until a school could be built in Section 11.

How the Community of Sand Creek Began by Holger Larson

Silverton Village - Park Township Section 27 - This was a platted village for the Arrow Line Railroad, and a hotel was built with the understanding that there would be traffic from the railroad coming through.

Pine County and its Memories-page 322

Springdale Community - Arlone Township Sections 23-24 - A small community of settlers came here because of the rich farm land that was advertised in this area.

One Hundred Years in Pine County-page 144

Tuxedo (Bergman) - Pokegama Township Section 26 - Tuxedo Inn was a very popular resort on Pokegama Lake. It had a ballroom, and well known orchestras often performed there. A post office was established at the inn and was called Bergman from 1898-April 1905 and later became Tuxedo but discontinued in October 1905.

Villstad Community - Partridge Township Section 4 - Swedish immigrants built a church in 1899 and named it Villstad after a village in Sweden, where they came from. A cemetery surrounds the church. The church and cemetery are still there and are well cared for.

Wareham Village - Sandstone Township Section 21 - There was a station here of the Great Northern Railway.

Whalens Village - Keene Township Section 21 - This was a proposed village for the Arrow Line Railroad.

Pine County and its Memories-page 90

Glasspool - A post office was here between July and November 1905. No location can be found.

Mille Lacs - A post office was here between 1856 and 1859. The location has not been found but is possibly in Ogema Township.

Mortimer - A post office was established on February 19, 1889, with Thomas Creeper to be the postmaster. Some records show that he could have operated the post office until April. The location has not been found.

Researched and written by LaJune Troolin

Meadow Lawn Community - Chengwatana Township - There were a number of nationalities that settled in Meadow Lawn. They were hard working farmers, and their first homes were log homes. The first school house (section 10) was also made of logs, and about 1903 a frame building was built.

One Hundred Years in Pine County-page 135; Pine County and its Memories-page 5

Midway Village - Mission Creek Township Section 34 - Midway was platted just north of Beroun in 1855 by Frank and Julia Lewis but was never developed.

Milburn Community - Pine City Township Section 32 - The earliest settlers, who were Swedish, came in 1885 to the Milburn area. It was a logging community, and in 1894 a lumber mill was started there. Milburn Community had two churches (Swedish Free Mission and Norwegian Lutheran), a school, and a cemetery.

One Hundred Years in Pine County-page 144; Pine County and its Memories-page 36

Mineral Springs - Finlayson Township Section 8 - A brochure was found advertising a mineral spring with therapeutic qualities northeast of Finlayson. A company was formed, sold stock, and started planning a resort and health spa. There is evidence of structures and curbing, but nothing became of it, and the company was dissolved.

Pine County and its Memories-page 111

Mission Creek Village - Mission Creek Township Section 10 - Most of the settlers in the village were Swedish, and it was considered a sawmill town. They had a sawmill, a railroad depot, a hotel, a general store, a post office (1876-1908), a blacksmith shop, a school, 26 houses, and a cemetery.

Morgan Stopping Place - Clover Township Section 20 - Henry Morgan owned a livery stable and an inn in this stopping place. The township meetings were also held there. When Mr. Morgan left in 1906, James Dunphy took over the livery and inn and also operated a sawmill.

Otto Village - Park Township - This was a proposed village for the Arrow Line Railroad.

Pine County and its Memories-page 268

Pine Grove Community - Pine City Township - The Pine Grove Community was located in the center of the township about five miles southeast of Pine City. The old government road ran through this section of the county. The community was made up of mostly Swedish immigrants. At first they logged but stayed on to farm when the logging was finished. They had a church and two schools in the area.

One Hundred Years in Pine County-page 143; Pine County and its Memories-page 35
Posted by Amy Troolin at 1:43 PM No comments: