The Phoenix Hotel was built in Hinckley right after the 1894 fire. It was located on the northwest corner of Main Street. The man in the picture is U.S. Mail carrier Baptiste Rolle.
Posted by Amy Troolin at 6:24 PM 1 comment:

Where in Pine County was the Phoenix located?  [Watch for the answer in a couple days!] 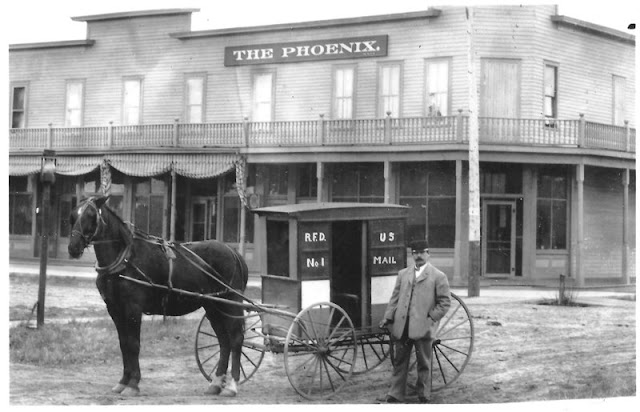 Posted by Amy Troolin at 6:40 PM No comments:

The Penitentiary for Life

H.H. Scott will spend his remaining days in Stillwater for the Murder of S.K. Erwin.

The jury brings in a verdict of murder in the second degree after being out seven hours.

At the time of going to press last week Mrs. Scott was testifying on behalf of her husband. Her testimony was principally in relation to Mr. Scott's insanity. She told of an attempt he had made at one time to poison himself. Of another time when she was obliged to call in the Village Marshal to take a gun away from him, and of still another time when he pretended to shoot himself, and of similar acts which she as a physician, said were evidences of insanity.

Doctors Paquin and Collins were called as medical experts on insanity and gave their opinion as to the mental condition of the defendant at the time of the homicide. In substance their testimony was to the effect that there were no indications of insanity. Several of the witnesses before sworn were placed upon the stand to substantiate some minor point, and the defense rested. The State then took the case, and recalled Mr. Rainsford who was in the round house at the time of the shooting and who saw the last shot fired. He swore that he was but sixty feet from the victim and that when Scott fired the last shot when standing over Erwin, he said, “I'll hang for it!” That the witness heard him say these words before turning to go away. The other testimony offered was of an unimportant nature, and the testimony was closed. A session was held in the evening when the argument of the attorneys was opened. Attorney General Clapp, for the State, spoke for about half an hour and after summing up the testimony in an able manner, touched on the importance of the punishment of such crimes. His argument was forcible and was not a disappointment to those who expected something above the ordinary. Mr. Johns, for the defense, occupied the attention of the jury for about an hour. He made an earnest plea to the jury, touching on all the important points and holding the jury as well as the large audience in wrapt attention by his earnest eloquence. For a man of his years, Mr. Johns may well be considered one of the brightest attorneys of the state. The case was submitted, but the Court did not charge the jury until the morning session. His charge clearly set forth the duty of the jury, and defined degrees of murder and manslaughter. It was clear, impartial and comprehensive. The jury retired at about 10:40 A.M., and it was not until within a few minutes of 6 P.M. that they agreed. When they slowly filed back into the Court room and took their seats in the jury box, the room was nearly depopulated, but it was but a few minutes before a small gathering assembled, and just as the bell was ringing for six, the Clerk read the verdict, finding the defendant guilty of murder in the second degree. After supper Court re-convened for the closing scenes of the trial. A death-life silence prevailed when the judge called the court to order and ordered Mr. Scott to stand up. When asked if he had anything to say “why the sentence of the law should not be passed upon you,” Scott replied “Nothing, but that I am innocent.” The Judge then sentenced Scott to confinement at hard labor in the state prison at Stillwater for the term of his natural life. When the sentence was passed Scott showed no signs of emotion, and went about the court room bidding his friends good-bye. He was taken to Stillwater on Monday.

After the sentence was delivered Mr. Johns, for the defendant, gave notice of motion for a new trial, which will be heard before the judge.
Posted by Amy Troolin at 6:28 PM No comments:

Guilty or Not Guilty

A Synopsis of the Trial of H.H. Scott for the Murder of Sidney K. Erwin

The trial of H.H. Scott for the murder of Sidney K. Erwin, which is now occupying the attention of the District Court, is one of the first cases of the kind ever held in the county, and is attracting a great deal of attention.

The circumstances attending the killing of Sidney K. Erwin at Hinckley, in this county, on the 22nd day of Nov. 1888, (a full account of which has been previously given in these columns) are still too fresh in the minds of our readers. That H.H. Scott was arrested for the crime, waived examination before the magistrate, and that the grand jury found an indictment for murder in the first degree, are also well known facts.

Court convened Wednesday, the 2nd inst., with Judge Crosby presiding, County Attorney, L.H. McKusick assisted by Attorney General Moses E. Clapp conducting the prosecution, while Henry Johns of St. Paul appears for the defense. The selection of a jury occupied Wednesday and Thursday afternoon and it was not until the fourth special venue had been exhausted that the twelve men charged with the awful duty of passing upon the guilt or innocence of a former neighbor, charged with the most horrible of crimes. The jury as completed consists of the following: Frank Cort, Jos. Bircher, Chas. Stephan, P. Buckley, John McGann, Albert Glasow, John Neville, Henry Kruse, J.C. Miller, John Bertsche, W.H. Russell and R.G. Robinson.

It was not until the evening session Thursday that the matters had been arranged and County Attorney L.H. McKusick arose and opened the case on behalf of the State. After stating the indictment found by the Grand Jury, Mr. McKusick spoke briefly of the duties and responsibilities of a juror in the case, which he said was even more arduous than were those imposed upon him as the prosecuting attorney. He touched upon the relations formerly existing between the defendant and the jurors, and argued the jurors to the discharge of their duties without fear and in an impartial manner. The testimony was then taken up.

Dr. C.O. Paquin was called and testified in relation to the state of Erwin's body, the wounds found etc., all of which has been previously given. Upon a cross examination by Mr. Johns, the Dr. stated that there were signs of powder burning on the outer garments of the victim, proving that the revolver was in close range.

Dr. Collins of Minneapolis, who with Dr. Paquin conducted the post mortem examination was next sworn. He testified to the course of the bullet, corroborating Dr. Paquin. A bullet was introduced and identified as the one taken from the body of Erwin. On cross examination the same facts in relation to powder burning were brought out.

George W. Booth being called testified to having arrested Scott and taking a revolver from him, which was introduced, identified and offered in evidence. When taken from Scott three chambers gave evidence of having been recently discharged.

Chris. Severtson who lives in Chisago county, but was on boarding car on the St. P. & D., track at the time of shooting said he heard two shots fired which sounded in the direction of the pump house, went to the door and saw a man shoot one shot. The man who shot was standing at the head of the man laying on the ground, whom he afterwards learned was Erwin. Did not know Scott and was not sure the defendant was the man.

A diagram was introduced in court by the prosecution giving the position of the dead body, the pump house, boarding car, round house etc., and H.J. Rath was recalled to identify the plat. He said he made it at the instruction of the Co. Attorney, and that it was correct. Geo. W. Booth was also recalled and stated that he was present when the plat was made and testified to its correctness.

Bartlett Knudson who was cooking in the boarding cars near the scene on the day of the murder knew Scott by sight. Saw Erwin at pump house. Heard shots and went to the door. Saw a man and woman going up track, and described the directions in which they went. Went to where the body laid. Erwin was not yet dead, and tried to raise his head after he arrived, but could not. Did not notice any of surroundings.

F.D. Rainsford said he was in the pump house when Scott and wife came to door; went to round house opposite. Heard two pistol shots which seemed to come from pump house. Looked out of window and saw Scott standing at Erwin's head, revolver in hand. After he saw the shot fired went out of front door of the round house and could not tell the direction Scott went. He also described the position of the body.

A recess was then taken until Friday morning, when Geo. W. Booth again took the stand testifying in relation to the circumstances attendant on Scott's arrest, the delivery of the revolver to him etc., and subsequently identified the clothes taken from Erwin and which had been in the custody of the Sheriff. No other important witnesses were examined by the State.

The defendant's case was opened by Mr. Johns in one of the strongest and most forcible addresses that has ever been delivered at the Pine County bar.

Sam. Norton, of Hinckley, was the first witness sworn by the defense. His testimony was in relation to his conversation with Scott after the killing. He described the condition Mr. Scott was in, and told of his meeting him, etc., all of which is familiar to the public.

H.H. Scott, the defendant, was next placed on the stand. He gave an account of the tragedy, which in every particular resembles the interview with the prisoner, which we published the day after. He said he had no intention of shooting Erwin when he went down to the pump house, that the first difficulty he had with Erwin was in August when he forbade his coming to the house. We have not time nor space to rehearse the scene of the tragedy as described by Mr. Scott, and which has previously been given in full. His story was told in a frank open manner, and cross questioning failed to tangle him.

Geo. W. Booth was the next witness called, and testified to having been called in by Mrs. Scott a number of times to quiet Mr. Scott. At one time he was called in to take a gun away from him. This was more than a year before. Mr. Scott's son was drowned.

He also spoke of several other times he had been called in, thought Scott's bad behavior was due to intoxication.

Harry Parker was sworn, but no testimony of any importance was elicited.

E. Veenhoven, Judge of Probate, testified that Mrs. Scott had in the year 1887 made an informal request of him for an examination into Scott's mental condition but as no information, as is by law required, was made, nothing further was done.

As we were obliged to close our forms early in the afternoon, none of the evidence submitted after noon could be included. As we go to press, the defense occupies the court. If an evening session is held, the case will doubtless be completed tomorrow (Saturday).
Posted by Amy Troolin at 6:58 PM No comments: