1. Denham, located in Birch Creek Township, was established in 1909. In 1908, the Soo Line Railroad had been built through the future town site. Farmer Frank Lind sold his land to the railroad, which platted the new village of Denham and sold lots to settlers.

2. The village was named after a Soo Line Railroad employee who had helped prepare the plat.

3. The Farmers' State Bank of Denham opened on July 12, 1910. Joseph Bocheck of Willow River served as president, Joseph Suk of Denham as vice president, and F.L. Olson of Walnut Grove as cashier. Several farmers, including Frank Lind, Nels L. Nelson, Jons Johnson, Nels Wenberg, John Mullen, and Mrs. Lars Paulson, bought stock in the bank, which started with a capital of $10,000. The bank didn't last very long; it failed in 1926.

4. A 1914 article in the Moose Lake Star Gazette described the growth of Denham. At that time, the village boasted a population of approximately 100 people. It was home to three general stores, a hotel, a blacksmith shop, a livery barn, a pool hall, the bank, a sawmill, a barber shop, a post office, a millinery shop, a restaurant, and a cream station.

5. George Cunningham opened another general store, the Cunningham Mercantile Co., in Denham in 1917. Emil Leaf was manager. Mr. Leaf eventually bought the business, which he later sold to F.E. and Sigrid Anderson, who renamed the business the F.E. Anderson General Merchandise store.

7. A devastating fire in 1928 or 1929 destroyed several stores on Denham's Main Street.

8. A private telephone line ran through Birch Creek Township as early as 1907. The Farmer's Co-operative Telephone Company extended phone service to more residents in the 1930s.

9. Many Denham residents attended the Swedish Methodist Episcopal Church or the Swede Park Lutheran Church, both of which were near the village. These churches were organized in either 1891 or 1894.

10. Denham's school children attended District No. 19, which was established on July 9, 1889. Minnie Smith was the first teacher. After the village was constructed, the school moved from its location east of town to a building in Denham.

The following comes from a 1912 Minnesota business directory.

Most books about the 1894 forest fire mention the Kelsey family of Brook Park. Two of the Kelsey brothers, Dr. Chauncey Kelsey and Caleb Kelsey, and their families lived in Brook Park at the time of the fire. Luckily, all of the Kelseys survived the firestorm, but authors tend to get family members and their stories mixed up.

Wilson Kelsey (born about 1814) and Jane Ann Chittenden (born in 1819) were married in January of 1842 in New York. Wilson and Jane had nine children:

Four brothers, Joseph, Chauncey, Caleb, and Byron, contributed to the establishment and growth of Brook Park. Joseph and Chauncey, with the Markham brothers of Rush City, founded a real estate company, bought ten thousand acres in Pine County, and proceeded to sell their land to settlers. Chauncey and Caleb moved to Brook Park in 1893. Byron came to the village in 1899 and opened a general store. Joseph never settled in Pine County, but he did provide financial support for his brothers' new town.

Let's take a closer look at these four brothers and their families.

* Joseph H. Kelsey married Sarah Jane Summers about 1871, and they had several children. Joseph lived in Minneapolis for thirty-three years. He worked in real estate and owned a general store. Joseph died on January 20, 1937.

* Dr. Chauncey Almer Kelsey founded and named Brook Park. He married Isabella Allen in 1872, and they had four children. During the 1894 fire, Isabella and three of the children (daughter Mabel was away from home at the time) saved themselves in Brook Park's millpond. The doctor was not with his family. He had gone with some of the other men to try to fight the fire. They soon realized that this was impossible and ran for their lives to the creek bed, where they managed to survive. The exhausted doctor did not rejoin his wife and children, who were frantic with worry, until late in the evening.

Chauncey and Isabella had the following children:

1. Mabel Kelsey, born in 1877 in Dodge, Minnesota. Mabel married Clive Owen in 1898 and had four children. Mabel and her family lived in Colorado, Kansas, and New Mexico throughout the years.

2. Maude Kelsey, born in 1879 in Dakota Territory. Maude was a schoolteacher. She married Charles Hallowell in 1917 and had one daughter, Dorothy. Maude died on July 21, 1972, in Minnesota.

3. Carlton Kelsey, born in 1881 in Dakota Territory. Carlton followed in his father's footsteps and became a doctor. He married Mabel Miller of Brook Park in 1907. Their first two children, Cornelia and Leonard, died on October 31, 1910, in Minneapolis. Carlton and Mabel had five more children. The family moved back to Pine County in 1912, and Carlton served as a doctor in Hinckley until he retired in 1948. Carlton died on February 27, 1976, at 95 years of age.

4. William Kelsey, born in 1883 in Dakota Territory. William married Julia (maiden name unknown) about 1904 and had several children. William was a brakeman for the railroad. He died in 1939.

Chauncey, Isabella, and their family moved from Brook Park to Minneapolis before 1900. Isabella died before 1907 because Chauncey married Adell (or Adella) Turner that year. They had one son, Almer, who was born in Colorado in 1909. Chauncey died in May of 1918 in Long Beach, California.

* Caleb Kelsey married Lucy Allen (sister of Isabella Allen) in 1879, and they had five children. Caleb was a carpenter and was instrumental in building Brook Park. Lucy and the two youngest boys joined Caleb and son Allen in Brook in July of 1894. Daughter Marion arrived a short time later, but daughter Flora stayed with relatives in the Twin Cities. Caleb, Lucy, and their children (except Flora) saved themselves in their well during the 1894 fire. The well's ladder stuck and prevented the well from closing, so Caleb held a wet blanket over the well's opening to prevent burning debris from falling on the family. This was actually fortunate, for had the well been closed, the family probably would have suffocated.

Caleb and Lucy's children were as follows:

1. Marion Kelsey, born in 1880 in Dakota Territory. Marion married George Over in 1906 and had one daughter, Carrol. Marion died in November 1, 1960, in California.

2. Allen Kelsey, born in 1882 in Dakota Territory. Allen was a carpenter like his father. He married Rema Fuller in 1921. They probably had no children. Allen died October 7, 1966, in California.

3. Flora Kelsey, born in 1886 in Dakota Territory. Flora did not marry and died on January 6, 1916, in Olmstead County, Minnesota.

Shortly after the 1894 fire, Lucy wrote and published The September Holocaust, which details the Kelsey family's experiences in Brook Park before and during the fire. By 1905, Caleb and Lucy had moved to Minneapolis. Caleb died December 1, 1909. Lucy eventually moved to California to live with her daughter, Marion. She died in California in the 1930s.

* Byron J. Kelsey married Mary Taft in 1877. Byron and his family moved to Brook Park in 1899, and he operated the general store there until he died on August 23, 1936, in Brook Park, Pine County, Minnesota.

Byron and Mary had the following children:

As one of Pine County's prominent families, the Kelseys left their mark on the county's history. They were hearty pioneer folks who worked hard to build their town and care for the families amid great hardships. Their lives and memory should still inspire us today.

1. Brook Park was originally named Pokegama, an Ojibwe word that means “one water jutting off from another.” Early on, it was the site of the Nelson Company lumber camp. In 1882, the Minneapolis and St. Cloud Railroad built a line through what would become Brook Park, and railroad maps labeled the future townsite as “Pokegama.”

2. Dr. C.A. Kelsey founded and named the village of Brook Park in 1893. Dr. Kelsey, his brother J.H. Kelsey, and brothers J.H. and G. Markham of Rush City had formed the Kelsey-Markham Realty Company and purchased ten thousand acres of land, which they sold to settlers. Dr. Kelsey hoped that the new town would offer a park-like setting along Pokegama Creek.

3. Of the new settlers, five families were Russian Jews that came up from Chicago, where they had operated push carts.

4. Brook Park was destroyed by the 1894 forest fire, and twenty-six residents lost their lives. Other townspeople saved themselves in their wells or in the small pond by the railroad tracks. On October 1, 1915, the town dedicated a monument to the fire victims, many of whom were buried in two trenches in the Brook Park cemetery.

5. The Brook Park School District, Number 24, was established on May 19, 1894. Residents volunteered their time and labor to build their new schoolhouse, and it was finished only a short time before it was destroyed by the 1894 fire.

6. In 1899, B.J. Kelsey, another of Dr. Kelsey's brothers, opened a general store in Brook Park. He was a kind, helpful man, who enjoyed assisting new settlers in getting their farms up and running.

7. The first village creamery was founded in 1905 as a private establishment. The Brook Park Farmers Cooperative Creamery, one of the earliest of its kind in the country, began operations in 1913. By 1918, it was paying out nearly $75,000 a year to its patrons.

8. Isaac Hazlett organized the Brook Park State Bank in 1910, and a Mr. Cram served as the first cashier. A.E. Eddy took over the cashier job in 1912. Fifteen years later the bank merged with the Farmers' and Merchants' Bank of Hinckley.

9. Brook Park's first newspaper, The Brook Park Enterprise, was published by W.C. Warren out of the Hinckley newspaper office. In 1915, Howard Folsom of Pine City established The Brook Park Banner. Sixteen-year-old Leonard “Scoop” Machart purchased The Banner the following year. For the next year and a half, “Scoop” printed the paper himself with a hand-roller press. He was attending high school at the time.

10. Brook Park was home to two churches, a Methodist church and a German and Norwegian Lutheran church. 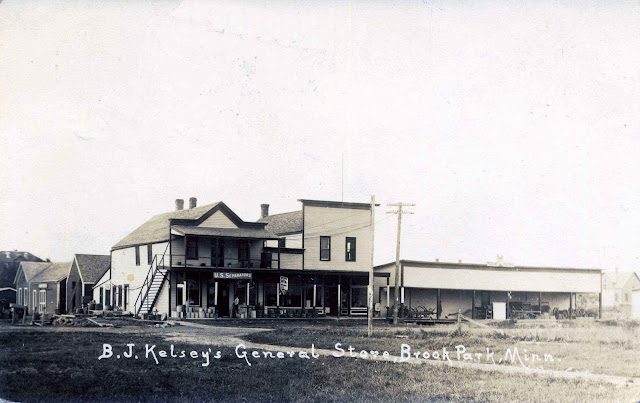