And now the rest of the story... Here's the follow-up article for "Speed on Ice".

Owing to the rain which fell last Tuesday and Wednesday morning, the races advertised to take place on Cross Lake were postponed until Thursday. Wednesday night the cold wave froze the water on the lake giving a fine sheet of ice over the course, which lay from a point nearly opposite Chengwatana to a point opposite 3rd Avenue in this village and was in excellent condition. Four horses were entered:

Fred A. Hodge, E. Veenhoven and A.H. Lambert were selected as judges.

The start for the first heat occupied some time, but was finally made, and from the position occupied by the spectators it seemed that they were quite even for about a quarter of a mile, but at about that time, Raven Boy and Dandy Billy began working to the front and for a time it was hard to say which would come in first, but Mr. Staples getting out of the course lost considerable time in getting back again, and Raven Boy came in first with Dandy Billy second, Black Frank third and Bob fourth. The second heat gave the same result, and decided the race, as it was best two in three.

The races were quite exciting and gave a good exhibition of fine trotting. One thing is sure: there isn't a county of the size of this in the state that can turn out four finer horses than Pine County had on the ice Thursday afternoon. This is but a beginning. Others will be apt to follow before spring.
Posted by Amy Troolin at 5:23 PM No comments:

On last Friday night a party from this place [Pine City] was invited by the campers to go up to the lake and participate in a dance at the Rescue Island Pavilion. About twenty-five of the lovers of dancing boarded the steamer and hied themselves to that favorite resort. Dancing was commenced at about nine o'clock and continued until 11:30. About 10 o'clock the electrical display in the northwestern heavens was something grand, and those not participating in the merry dance were out enjoying the fireworks, which far surpassed any pyrotechnics that man ever invented. At 11:30 a lunch was served, which lasted until 12 o'clock, when the steamboat whistle warned those who were going back to town that it was time to leave. A storm was approaching very rapidly from the southwest, and the sky was as black as ink, with not a star in sight. The crowd embarked on the boat, and the lines were cast off, Mr. Webber signaling the engineer to back up. But the engineer misunderstood the signal and went ahead, driving the bow of the steamer so far into the shore that it was impossible to back her off. About this time the storm struck the boat with all its fury, and it was only through the heroic efforts of a few that the crowd was enabled to get off the boat, which was at the mercy of the wind and waves. After the people disembarked they ran to the pavilion, but Mr. Bangle stood in the door and told them that the pavilion was no safe place of shelter, as it was liable to be unroofed at any moment. As it was the walls were blown about fourteen inches out of plumb. The crowd then scattered in every direction, some going to the house, some to the barn, and others to the woods. To add to the consternation, the waves dashed clear over the boat, carrying away the smoke stack and the water going down into the fire box caused a sheet of flame and sparks to ascend twenty-five or thirty feet in the air, and the wind drove them against the panic-stricken crowd, and through the crowd into the hay, but about this time it began to rain in torrents, putting out the sparks, so that no damage was done.

After the storm abated, Mr. Webber succeeded in getting his boat afloat, and at about 3 o'clock took all the passengers who wished to leave on the boat, and arrived at Pine City at a quarter of 4. The boat received very little damage considering the way she was dashed around on the rocks. The balance of the party made themselves as comfortable as possible in the house and barn until daylight, when those who were camping departed for their several camps to see what damage the storm had done them, and those from town drove home.

One of the gentlemen of the party during the storm was found with his back to the storm and his legs and arms locked around a large hard maple tree. He said he was afraid he was going to be blown away.
Posted by Amy Troolin at 6:33 PM No comments:

1. In the mid-1890s, John A. Oldenburg, a Finnish-born agent for the St. Paul and Duluth Railroad, settled in a little village called “Nurmijarvi,” which is Finnish for “grass lake.” Noticing the abundance of potential farmland close to his new home, Mr. Oldenburg founded the Oldenburg-Jasberg Land Company to attract settlers, especially those from his native Finland, to the area.

3. The Oldenburg-Jasberg Land Company donated 40 acres for a Finnish cemetery, church, and school. The company even refunded the train fare from Minneapolis for settlers who bought land near Nurmijarvi.

4. Mr. Oldenburg worked hard to improve Nurmijarvi. In 1896, he built a large white house, aptly named the “Villa Blanca,” for his new wife. Over the years, he also opened the Adalbert Hotel, a bank, and a mercantile store.

5. The 1894 forest fire burned right up to the southern outskirts of Nurmijarvi-Finlayson but did not destroy the town. A few buildings did burn, but no one died in the fire. The State Fire Relief Commission provided fourteen relief houses for residents who had lost property.

6. Finlayson's school district #29 was organized on July 11, 1898, and village residents constructed a schoolhouse shortly afterward. In 1913, the village built a new school because townspeople were concerned that the old one was too close to local saloons. The new school received an addition in 1918 and a gymnasium in 1938.

7. The village of Finlayson was officially incorporated after an August 22, 1905, election in which 21 of the 24 voters favored incorporation. N.D. Simpson served as the first village recorder. The name “Finlayson” seems to reflect the town's Finnish heritage, but the village was actually named for Scottish lumberman and sawmill owner David Finlayson.

8. Gust Holt was the first buttermaker at Finlayson's Farmer's Co-operative Creamery, which was organized in 1907. Oscar Bergseth took over the position in 1916 and served until 1948. By 1918, the successful creamery was paying out $150,000 annually to its patrons. In 1928, a new brick creamery replaced the earlier creamery building, and in 1947 the business added a warehouse and elevator that was equipped with a hammer mill and mixer.

9. The Finlayson First State Bank opened for business on March 10, 1908. J.H. Lingren, the first cashier and secretary of the corporation, received $720 per year in salary. His successor, George Carroll, received $1200 per year by 1910. H.E. Shafer took over the position in 1911. In 1918, Lillie B. Mack was hired as assistant cashier. Her name was always written as “L.B. Mack” in the bank's minute books to hide the fact that she was a woman.

10. By 1918, Finlayson could boast of being home to two hotels, four general stores, a bank, a furniture store, an undertaker, a barbershop, two potato warehouses, a creamery, a pickle factory, two blacksmith shops, a well digger, a billiard hall, a fire department, a brass band and orchestra, a newspaper (The Finlayson Register), and even an electric light and power plant.

1. Mark Andrews, timber cruiser for the Tozer Lumber Company, became one of the first settlers in the Markville area when he built a “stopping place” on the St. Croix River a mile and a half south of the future town site. He called his small settlement “Pansy.”

2. As more settlers moved into the area, Mr. Andrews and his neighbors established a ferry at Pansy to carry passengers across the St. Croix. John Blackburn operated the ferry, which ran by a system of cables, for many years. A bridge replaced the ferry in 1920 but was destroyed a few years later by an ice break-up and was never rebuilt.

3. The Soo Line Railroad came through eastern Pine County in 1912. The same year, Mark Andrews surveyed and platted a village along the line and named it “Markville.” Mr. Andrews opened a livery barn in his new town.

4. By 1914, Markville was thriving. It boasted a post office, a school, two stores, two saw mills, a hotel, a hoop-making industry, and two “Blind Pigs” (i.e., saloons). The Consolidated Lumber Company was founded not long afterward along with two potato warehouses, a stockyard, a hardware store, and a restaurant. By 1925, Markville was home to a cooperative creamery and a newspaper, The Markville Messenger.

5. Matthew Bullis of Sandstone established the Markville Bank in 1915. John F. Bruner, cashier, managed the bank, which claimed over $24,000 in deposits after only a few months in operation. The bank building was said to be fireproof and had been built at a cost of $3,500.

6. Markville residents built a large brick schoolhouse in 1918 after the first school, built in 1912, became overcrowded. The school offered a four-year high school program beginning in 1923 and achieved a peak enrollment of 150 students (both grade and high schools) in 1924 and 1925. Unfortunately, enrollment declined during the 1930s, and the high school program was discontinued late in that decade.

7. Three churches were active in Markville over the years: Sacred Heart Catholic Church, Markville Presbyterian, and Zion Lutheran. The Presbyterian girls' Sunshine club purchased the Presbyterian church's bell in the late 1910s by collecting a mile of pennies.

8. An electric light plant was installed in Markville in the 1920s. The plant, which was powered by a gasoline engine, provided electricity to the town from dusk to eleven o'clock every evening.

9. Until 1923, Markville teamed up with Cloverton to sponsor a “Pioneer Fair.” After that time, Markville hosted its own fair, which was put on by the Community Club.

10. Markville held a Homecoming in 1961 that was attended by over 600 people, many of whom were former residents. 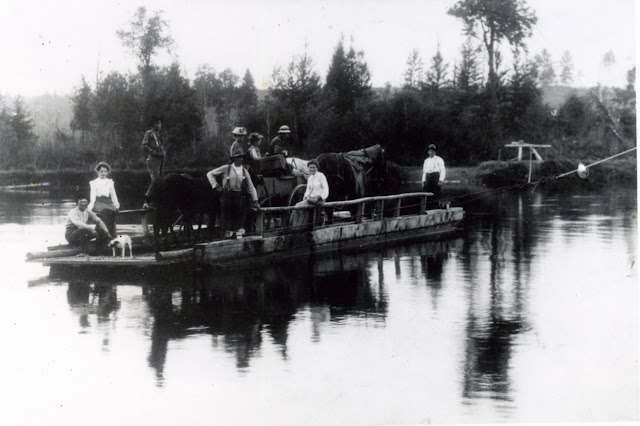 The Pansy Ferry - Mark Andrews is the man on the far left with the dog.
Posted by Amy Troolin at 9:51 AM No comments: