The Village of Sandstone

The building of Sandstone is coeval with the quarry. At first it was two tents, then a log boarding camp and hovels, and a few scattered buildings near the spring in the ravine south of the quarry. Only one family remained over the summer of 1886, the remainder having removed to Sandstone Junction. With the completion of the Kettle river railroad, people connected with the quarry built houses and brought their families here. A post office was established in January, 1887, and W. H. Grant, Jr., was commissioned postmaster. In May following, the townsite of the old town was platted by the Sandstone Townsite Company, numerous lots were sold and building progressed rapidly. The building of the Eastern railway of Minnesota in 1888, for several months, made Sandstone by far the liveliest town in the county. A fine system of water works were constructed, two commodious hotels opened, and many business and houses were added to the already prosperous town. In February 1889, the village was incorporated and its officers elected. On the day of the annual election William H. Grant, Jr., was elected president of the village council, and his successors have been as follows: Michael Ring, Albert L. Glasow, J. E. Erickson, Christ Heisler, Jr., Peter Peterson, F. L. Dennie, Angus Gunn, H. P. Webb. In 1890 the population was 517; 1895, 1054; 1899, 1800. In October, 1894, the plat of Sandstone Quarries was filed by the Minneapolis Trust Company, and then commenced the rebuilding of Sandstone. 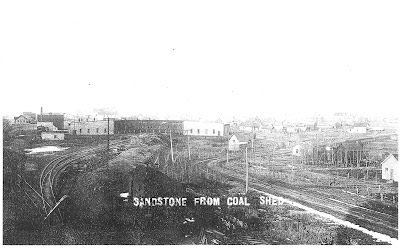 While this photo is not original to the Sandstone Gift Souvenir, it was taken not long afterward and shows a very similar scene.