Considerable excitement was caused throughout the County, last Monday and Tuesday, and especially in Pine City, by an automobile tearing across country at about 60 miles an hour, more or less.

The first couple times the car went through Pine City, it was “here it comes and there it goes” so Tuesday afternoon Marshal Biedermann made up his mind to arrest them for speeding when they came through again. Half of the village was out in force to see the “pinch” made but were disappointed as the speeders were delayed by trouble with their car, and had evidently been warned, as they came through town about five o'clock at a snail's pace.

The car, an Essex Six owned by the Twin City Motor Co. had started from the Capitol Monday afternoon, on a race against time for 24 hours.

For more information about Essex motorcars, click on this link.
Posted by Amy Troolin at 10:17 AM No comments:

1. Before 1895, the site that was to become Beroun was occupied by only a railroad siding and flag stop. The land was owned by Maurice Burlingame, who had purchased it from the U.S. government in 1888. Mr. Ferman built a hotel on the west side of the railroad tracks in 1895, and the John Schuller family constructed a log cabin the same year.

2. Railroad land agent James Kluzak recruited numerous settlers, especially Czech Catholics, to the area beginning in 1895. Mr. Schuller, with the help of fellow settler Louis J. Ouradnik, started a post office in January of 1896. That summer, Joseph Chalupsky and his family moved to the new town, now called Beroun after a village in Czechoslovakia. Mr. Chalupsky officially platted the town site and built the first general store. He also started a sawmill.

3. On October 25, 1896, a group of Czech Catholics met at Mr. Chalupsky's home to established a church. The railroad donated a plot of land, and the group built an 18x30x12 structure for $168. Mass was celebrated for the first time in the new St. Joseph's Catholic Church on December 26, 1896. By 1902, the parish had grown enough to build a new church. The first resident priest, Fr. William Guilfoyle settled in Beroun in 1926 and guided the congregation through the process of building a brick church, which was completed in 1927 at a cost of $35,000.

5. Beroun was served by school district No. 25 beginning in 1895. The district operated two schools in the Beroun area. Miss Mattie Butler taught two months at each school in 1896 and earned a monthly salary of $28. In 1898, the Beroun District No. 34 was established. The school board authorized a new frame schoolhouse in 1900 and a two-room brick school in 1925. The latter cost $13,000.

6. Joseph Chalupsky was one of Beroun's premier businessmen. He founded two general stores and in 1904, a brewery. Unfortunately, the latter burned in 1910. Mr. Chalupsky also served as postmaster from 1899 to 1903.

7. Other Beroun industries included a cheese factory (which lasted only three years), a creamery (started by Peterson and Falk in 1911), two potato warehouses (which handed 54,000 bushels during peak production), and a pickle station (built by M.A. Gedney in 1921).

8. On November 14, 1914, Peter Manderfield of St. Paul joined Beroun residents John Rundquist, Andrew Ness, Adolph Strohkirch, and Gust Strohkirch to organize the Beroun State Bank. The bank operated for 28 years until it consolidated with the First National Bank of Pine City in 1942.

9. In the late 1930s and early 1940s, Beroun hosted a Harvest Festival. James A. Kuzel served as “mayor for the day” for the unincorporated Beroun during this annual event.

10. The Beroun pavilion was built in 1922 and served as “town hall” and community center for many years. 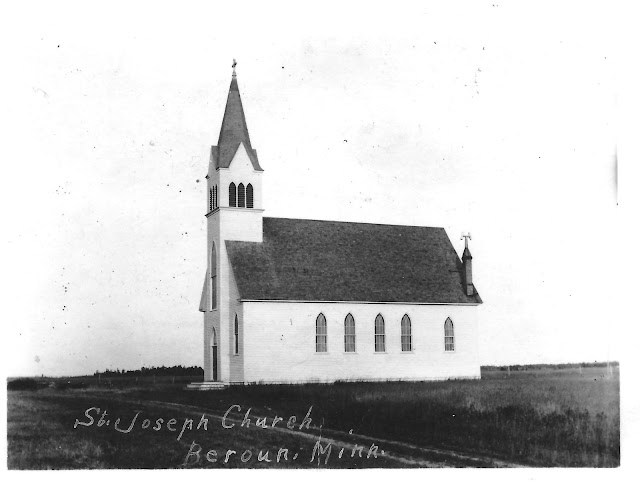 The second St. Joseph's Catholic Church in Beroun, built in 1902 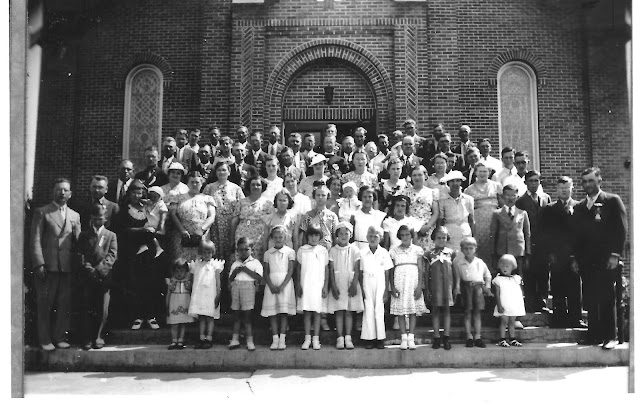 1. In 1885, quarrying began on the Kettle River at Sandstone. The distinctive pink sandstone was so popular that entrepreneurs longed to get in on the quarrying action. In 1892, the Water Power Sandstone Company founded its quarry two miles north of Sandstone at Hell's Gate.
2. The quarry flourished, and the St. Paul and Duluth Railroad consented to build a spur from Miller (later Groningen) to the new operation. The spur was completed in 1892, and the quarry shipped 5,000 tons of stone that year alone. The quarry soon employed between 300 and 500 men, and business actually doubled over the next several years.

3. People soon began to settle around the quarry, calling their settlement “The Quarries,” “North Sandstone,” or “Upper Quarry.”

4. The forest fire of September 1, 1894, devastated the quarry and settlement, and several residents lost their lives. One boarding house did survive the blaze, and survivors from Sandstone joined their neighbors there to wait for rescue crews from Duluth.

5. In 1896, businessman Martin Ring, who had once operated the Sandstone quarry, founded his own quarry next to the Water Power Sandstone Company, which had rebuilt after the fire. Mr. Ring had received a contract for seven hundred carloads of sandstone for use in the Minneapolis reservoir.

6. Mr. Ring platted a village on the bluff above his quarry and named it “Banning” after William L. Banning, who was a past president of the St. Paul and Duluth Railroad. Banning's plat consisted of six streets.

7. By 1899, Banning could boast of a school, two hotels, a saloon, a general store, a post office, and several houses along with the two quarries. Mr. Ring served as postmaster.

9. Quarrying continued in Banning, and the Barber Asphalt Company from St. Paul moved to town around the turn of the century. The village seemed to be flourishing.

10. Prosperity did not last for Banning. By 1905, the quarries had closed due to lack of demand for building stone. The asphalt company continued to operate, but the town declined. By 1908, only 150 people lived in Banning, and the railroad changed the village's name to “Quarry.” Townspeople tried to hold onto their community, evening voting to purchase a new pumping station and water tank for $1500 in 1911. It was a loosing battle. The asphalt company closed in 1912. Fire destroyed most of the village on July 11 of that year, and most residents moved away. The general store closed. Banning became a ghost town. 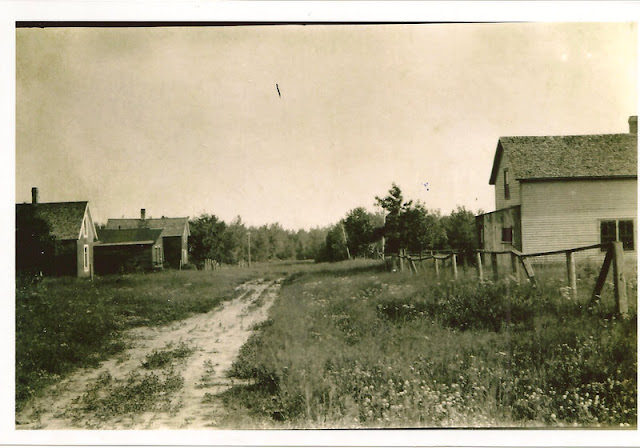 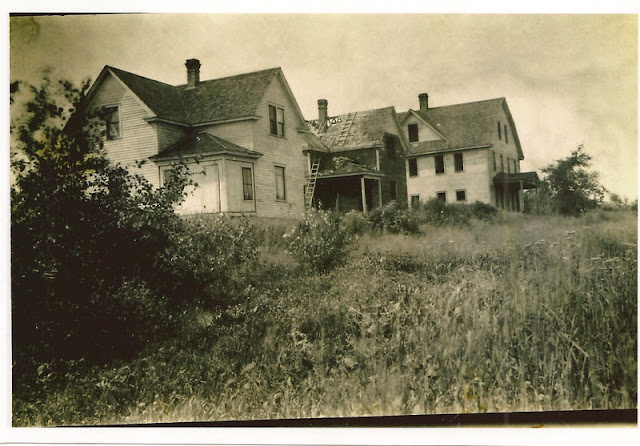 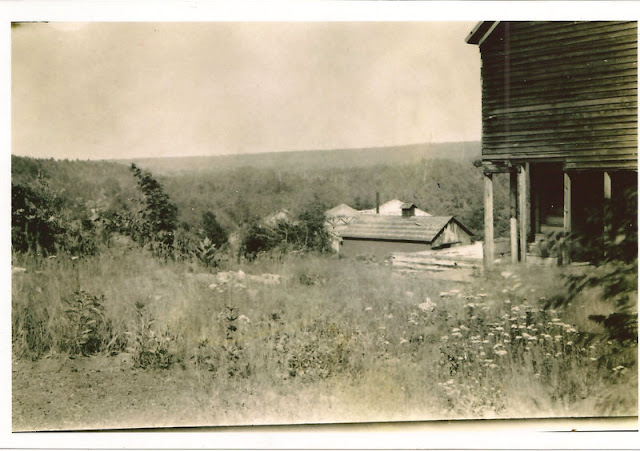 From Pine County Courier, May 19, 1910: One of the worst train wrecks that ever occurred in this part of the country happened at Finlayson about 1:30 last Sunday morning when the fast northbound freight jumped the track, killing two men and demolishing 13 freight cars loaded with grain and merchandise. The residents of Finlayson were awakened by a terrible crashing noise and before many had reached the scene, several cars were burning fiercely and the sight was one long to be remembered. The accident happened a short distance from the depot and the Finlayson fire department was summoned at once, but they had been fighting a fire the night before and had left their engine some distance in the country. It was brought into service as soon as possible and was the means of saving all of the train that was not wrecked and also much of the contents of the wrecked cars. The Hinckley department was also summoned and were brought on a special train. One of the first cars in the wreck contained tar paper and several barrels of oil. This made a stubborn fire and it was late Sunday forenoon before it was fully checked The big freight engine was on its side between the main and side tracks, and nine cars with their contents were piled in a promiscuous heap. The back end of the engine was almost buried by the contents of the cars nearest, containing heavy iron bridge timbers, brick, and shelled corn. Four other cars near the center of the train and on the other side of the depot were doubled up and thrown in to the ditch, each one ploughing deep holes in the ground where they struck. As soon as the fire had been partly subdued, search was begun for the bodies of Frank St. John, fireman, and Wm. Young, head brakeman, who were known to in the wreck. Only parts of their bodies were discovered as the tender had jammed them against the boiler where they were almost entirely cremated and death must have been instantaneous. Mike Lynch, the engineer, had a miraculous escape from death and does not know how it happened. When the engine left the track, he says something hit him and hurled him through the window and he struck with considerable force on the ground, but was not seriously injured. A wrecker was sent from Duluth and the track was cleared by Sunday afternoon, the night passenger train going over the G.N. tracks from Hinckley. The exact cause of the accident is a mystery. It is rumored that the switch was turned and the switch lamp was sitting on the depot platform, while some think that some of the cars ran off the side track after the engine and several cars had safely passed the switch. Coroner McEachern was on the scene early Sunday morning and on Monday convened a coroner’s jury which gave out their opinion that the “wreck was caused by a switch being opened by some unknown parties in possession of a switch key.” 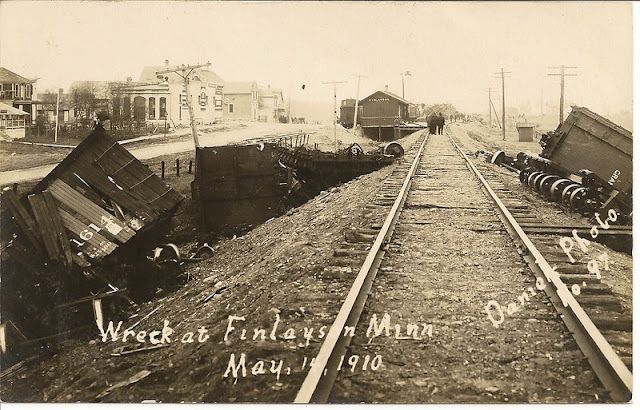 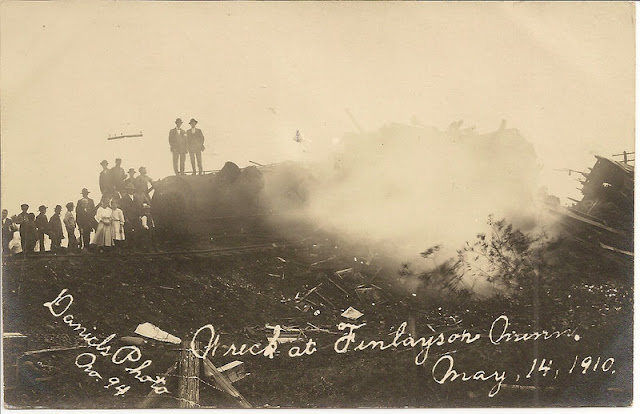 Hinckley, June 15. – The meat market burned this morning, between 3 and 4 o'clock it was discovered on fire and an alarm sounded and in less than one-half hour it was consumed. David McIver the proprietor slept in the building and the first he knew about it the burning mass was falling on his bed. He succeeded in dragging his truck out on to the street, and citizens helped to save which they could but that was very little. He bought the building of Kick & Radden last April soon after it was moved from its old site. It is thought the fire originated in or about the chimney as he had a fire in the stove in the evening.

A man employed on the St. P. & D. R.R. [St. Paul and Duluth Railroad], working on the grade about one mile north of the village died very suddenly last Sunday afternoon of hemorrhage of the lungs. He was not considered very strong and was given light work in consequence, but for the past week he had been drinking very heavily, and on the afternoon in question was seated at a table writing when suddenly he leaned back and asked for water, it being brought at once but he was unable to drink any. Soon the blood began to pour from his mouth profusely and he died before his companions could summon a doctor from town.
Posted by Amy Troolin at 4:44 PM No comments: