The following text and advertisements about Brook Park come from the 1926 promotional booklet entitled Pine County: Where Folks are Homeowners.

Brook Park, Pine county, is a village of about 200 population, located on the Great Northern Railway, midway between the Twin Cities and the head of the lakes, two of the best markets in the world. We are also located on Trunk Highway No. 23, about 6 miles west of No. 1, and about 10 miles east of No. 5, Trunk Highway No. 23 running from a point on No. 1 south of Hinckley, through Brook Park, Mora, Milaca, St. Cloud to Paynesville, Minn., thereby giving us very good connections and good roads to all points.

The land in this locality is all what is known as cut over land, at one time covered with a growth of pine, all of which was cut off several years ago. Most of the unimproved land is now covered with a small growth of poplar and brush, easy to clear, giving the owner plenty of fuel. The land, when cleared, will produce all kinds of crops that do well. Potatoes, grain and grasses are some of the best; clover is also known as a weed, the clover seed business being one of the best paying of any with but little work to harvest the crop, as most of it comes without seeding. Potatoes also do well. All buyers of potatoes who handle the crop here always speak well for the kind the land produces; two to three hundred bushels to the acre is a common occurrence and some varieties in peat even do better. Grain is also a sure crop. Oats run as high as 50 to 60 bushels to the acre, and early varieties of corn will mature, giving the dairyman plenty of feed for the stock.

The farming country in and around is well taken care of by rural mail routes, there being three out of this office daily, leading in every direction. Rural telephone lines extend to all parts, and practically every farm has a telephone. Roads leading out of town are all in good condition.

If you are considering a new location and want to be near good markets, with fine railway service and good highways, look up this section of the state. 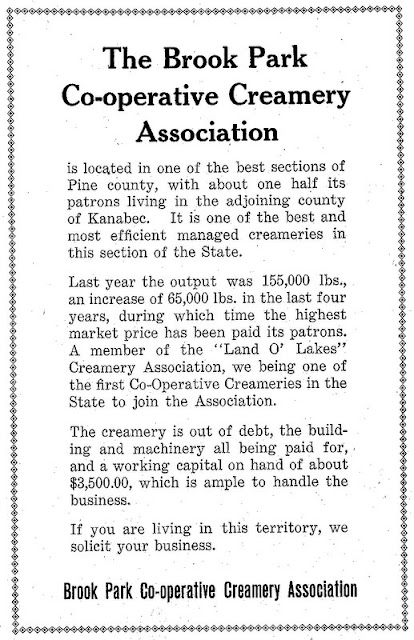 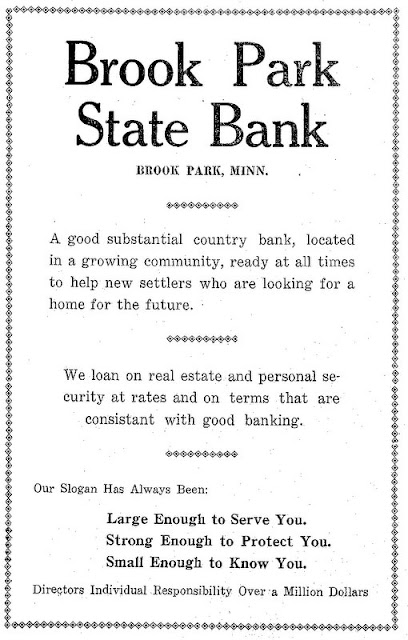 Posted by Amy Troolin at 6:15 PM No comments:

The following text and advertisements about Beroun come from the 1926 promotional booklet entitled Pine County: Where Folks are Homeowners.

A prosperous village of 200 population, midway between Pine City and Hinckley on the Northern Pacific railway and Highway No. 1, the center of a very productive farming community, devoted to dairying, poultry raising, and general farming.

The Beroun territory is settled largely by Bohemian farmers who have demonstrated their ability to transform a cut-over country into a prosperous farming community. Dairying is the basic industry as evidenced by the success of the local co-operative creamery association, large dairy barns, silos, and numerous fields of alfalfa.

This territory was originally covered with hardwood timber, some fine stands of which remain, has a very productive clay loam soil and some peat lands which with modern farming methods are being made to produce abundantly. Prices of improved farm lands vary from $35 to $100 per acre, depending upon improvements and location.

Beroun ships on an average of a car of live stock a week, over $100,000 worth of butter a year, 50 to 90 cars of potatoes a year, has one of the M.A. Gedney Co.'s most successful pickle producing stations and ships a large amount of poultry products and clover seed.

Potato raising contributes no mean measure of the success attained by several of our farmers, some fields having returned as much as $400 per acre last season, and offers a means of securing large returns from a small acreage in favorable season.

This section has never known a crop failure and offers to the man of moderate means an opportunity of securing a productive farm home, near to market, good schools and healthful climate. 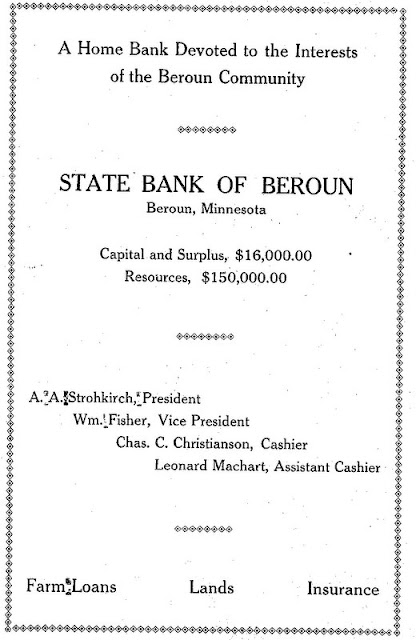 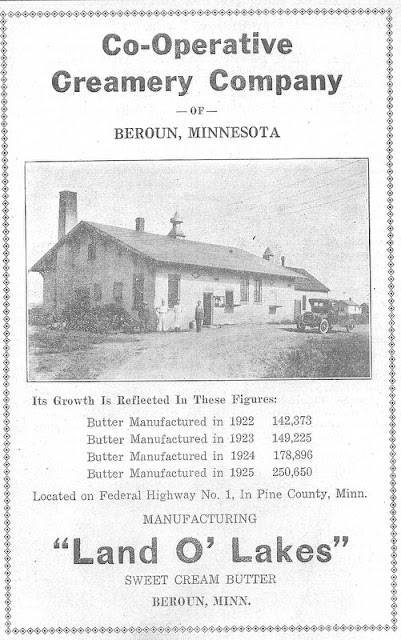 Posted by Amy Troolin at 6:47 PM No comments:

The 1926 promotional booklet on Pine County included feature stories, advertisements, and sometimes pictures for each of the county's towns. The section about Askov follows.

About 20 years ago a group of Danes started this colony in order to attract that class of Danes who valued the spiritual inheritance of their mother country highly, and who wanted to find a place where all the good and valuable ideas as to this life, and life beyond, might be preserved and propagated in their children.

The land was, in reality, a worthless waste covered with stumps, stones, and brush. It had been robbed of its wealth by the great lumber companies. Fire had swept over it and consumed everything left by the lumberman. Several times it was tried to colonize it, but without success. The settlers would not stick. The few that did stay were living in Indian style in small log huts, daubed with clay to keep out the cold and wind. Each hut was surrounded by a small clearing of an acre or so, where a little garden truck was raised; otherwise the settler spent his time hunting, fishing, and attending town meetings.

The colonizers were successful in attracting a large number of land-seekers and home-builders and sales went fast in spite of the physical aspects of the country. Mr. L.C. Pedersen, the leading spirit, was so full of the future possibilities of the country, which he painted in words so alluring that everyone who came in contact with him seemed to be inspired.

Time went on and things progressed. The country lost its wild appearance. The village grew; a public school was built, outgrown, added to, and rebuilt in succession; a church was erected, a pastor called; co-operative associations were formed; a creamery started; all things went well until this day, and now we have a smiling, prosperous community, dotted with beautiful, well kept farm homes in which dwell happy, contented men and women surrounded by romping, roundfaced, gay children. Instead of the stumps, stones, and brush the fertile fields are covered with crops of all kinds, and in the pastures among the scented clover dairy cows, thoroughbreds, are grazing or sunning themselves.

The town is a thriving village, newly built and newly painted, containing school and church and all kinds of up-to-date stores and the largest and best equipped printshop in the county, where job work running well over $25,000 was turned out the past year.

We have created a spot here in Pine county, Minnesota, which now and in times to come is worth hundreds of thousands of dollars to the state and to society in general. We have worked hard to gather our own people here, not in order to segregate them from America and American ideals, but in order to have a place where all the good we have brought with us from the mother country may thrive and bear fruit, and where we may in some degree, inculcate some of these ideals into our friends who came from other lands to found homes in America. We are a large community, but wish to double our number; acres upon acres lying around are idle and need a tiller, so if you are in search of a home, visit Askov and see its possibilities; then you may decide to dwell among us. 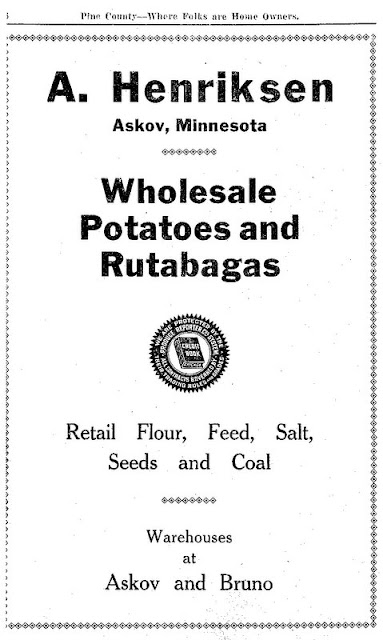 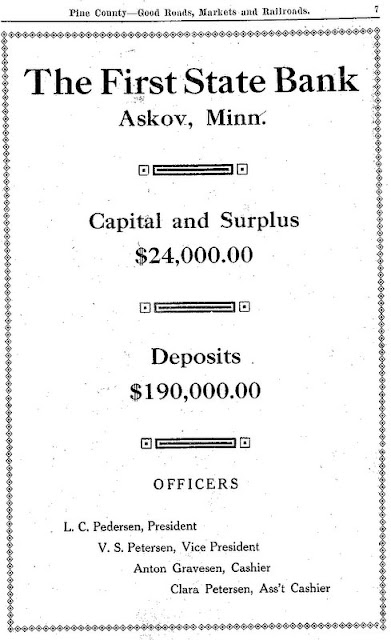 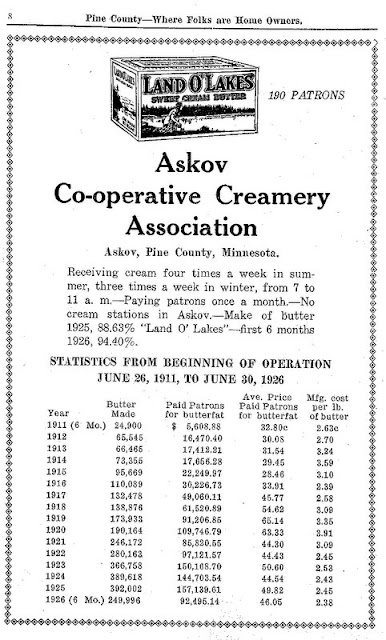 Posted by Amy Troolin at 6:06 PM No comments: