1. The Great Northern Railroad was completed through Pine County in 1887. The railroad established numerous stations including one named Mansfield Station. Settlers were already moving into the area by this time, including the Doyle brothers, Jimmy, Jack, and Mike. The Doyles sold food and drink to loggers who worked at local camps, but the brothers were a pretty tough bunch. They allegedly liked to put knockout drops in their customers' drinks and then relieve them of their money.

2. By 1894, most of the residents of Mansfield Station were associated with the railroad or the lumber industry. R. L. Saunders was the telegraph operator. William Nestler, the section foreman, lived in Mansfield with his wife, Annie, and their children. Pete Peterson and Matt Hands were section crewman, and the Tozer and Barter Logging Company had opened a warehouse to store their supplies.

3. In 1895, the Empire Logging Company constructed the Fleming Logging Railroad that began just southeast of Mansfield Station. The railroad transported logs from Pine County lumber camps to the Yellow Banks landing on the St. Croix River. The railroad was discontinued in 1898 or 1899 and became a wagon road around the turn of the century.

4. Mansfield Station received its post office on April 10, 1896. It operated out of the Tozer and Barter warehouse.

5. In 1898, the railroad changed the little village's name from Mansfield to Bruno because there was already a Mansfield Station elsewhere in Minnesota. No one knows for sure how the village got its new name. It might have been borrowed from French hotel proprietor and logging company owner Bruno Vinette. It may also have been a corruption of the German word for “bear.” A local saloon kept live bears for the amusement of its customers, which included German loggers.

6. Bruno's first schoolhouse, a 10 x 12 foot structure, was built in 1901. The school population soon outgrew it, and a new, larger school was built the following year. Bruno's school district, #54, was also organized in 1902.

8. The new village council got busy immediately and passed the first ordinance. It regulated the local saloon and specified the following: “The saloon interior be visible from the street at all times, with a light burning all night. No minors allowed in the saloon. The saloon be closed Saturday at 11:00 p.m. and not opened until Monday morning. No liquor sold during the hours the saloon was required to be closed.”

9. The first white child born in Bruno, William Gellatly, Jr., arrived in December of 1903. Another child, William Marihart, was born in January of 1904.

10. By 1904, Bruno was a bustling village. Businesses included the Marihart and Nelson sawmill, a shingle mill, John Stafford's general store, a meat market, a saloon, Pat Murphy's livery barn, the Bruno Farmers' Produce Company, and the Farmers' Land and Cattle Company. The village could boast of boardwalks, four kerosene street lamps, a new “lock-up” managed by village marshal Andrew Nelson, a new two-room schoolhouse, and two churches (Catholic and Presbyterian). Fitzhugh Burns donated the land for the two churches, and the Farmer's Land and Cattle company, managed by Pat Murphy, donated $500 toward the construction of each.

A bad fire occurred at Sandstone last Friday night, when the Webb Hardware store and the garage adjoining the First National bank was completely destroyed by fire. The interior of the bank was badly damaged by smoke and water, and the Masonic hall, over the bank, was practically ruined. The lodge furniture and equipment was burned and the room burned out.

The building that houses the Sandstone Courier printing plant is near the garage with a vacant lot between. The Courier building caught fire but it was extinguished before much damage was done by fire, although machinery and type was damaged by some water.

The bank and garage buildings were built by the late Alexander McEachern between 25 and 30 years ago, who operated the old Superior hotel in what was the garage building, which was then two stories and had a store in the other building. 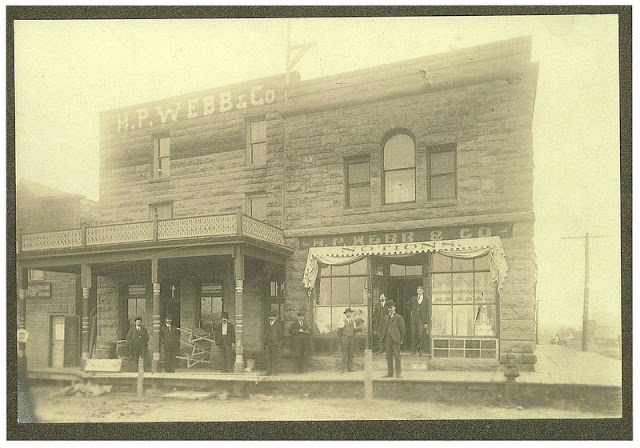 H.P. Webb & Co. once occupied these two adjoining buildings on the northeast corner of Main Avenue and Fourth Street in Sandstone. 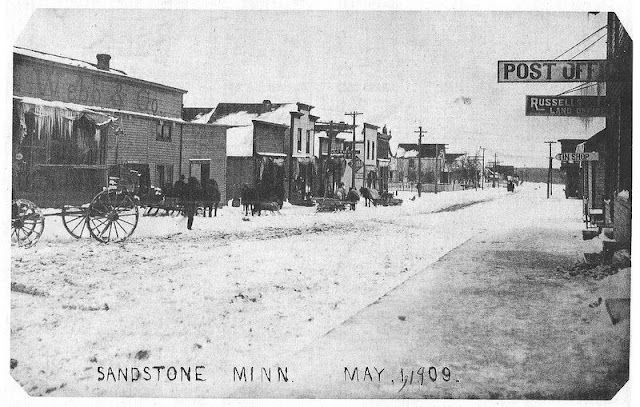 After 1906, H.P. Webb & Co. was located in the wooden building behind the sandstone structure on the corner. 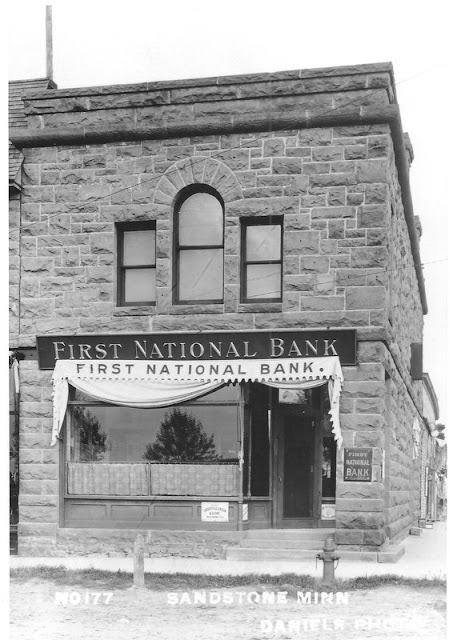 Sandstone State Bank purchased the corner building from H.P. Webb & Co. for $5000 in 1906.  Later it became First National Bank.  Notice the adjoining sandstone building on the left and the wooden H.P. Webb & Co. store in the back. 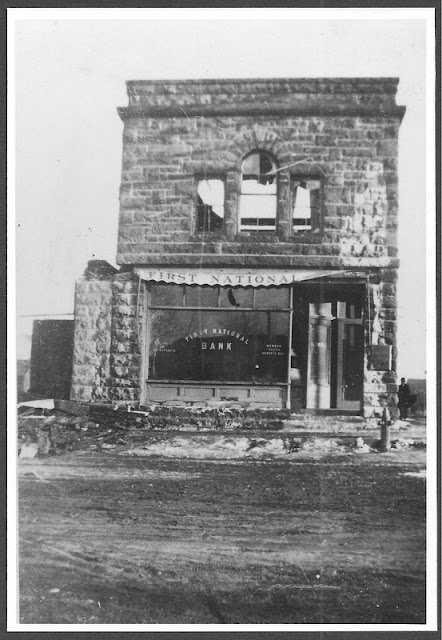 The First National Bank was not completely destroyed by the 1922 fire, but the buildings to its side and rear were.  The bank building was remodeled.  Today it is home to Sandstone History & Art Center.
Posted by Amy Troolin at 6:52 PM No comments:

1. The village of Mission Creek got its name from a small creek that flowed near the settlement. The creek, in turn, was named for the mission established on its source, Lake Pokegama. 2. Logging became Pine County's primary industry in the mid-1800s. The logging company Hunter and Taylor built their sawmill at Mission Creek in 1878. The mill was destroyed by fire twice before the Laird and Boyle Company purchased it in 1880. 3. Mission Creek was located three miles south of Hinckley. It was a company town, meaning that Laird and Boyle owned just about all of it, from the mill to the store to the hotel to the houses where employees lived. 4. The company even organized a school, District No. 8, for Mission Creek's children on February 7, 1880. 5. The sawmill at Mission Creek was quite large, employing 100 men and sometimes processing 75,000 feet of lumber per day. The mill used up to 80 to 100 oxen to haul logs and power their equipment. 6. On the eve of the 1894 fire, Mission Creek boasted 73 residents, the mill, a general store, a hotel, a blacksmith shop, the school, and twenty-six homes. 7. Already by this time, much of the logging around Mission Creek had been completed, and many residents had moved away. Others chose to stay and purchase land from the company. 8. On September 1, 1894, the entire town of Mission Creek, except for one house, was destroyed by a massive forest fire. Just that morning, mill workers had burned a huge pile of stumps near the town. When the fire swept through, Mission Creek's residents huddled in a potato patch. The fire blew over them, but no one died or was seriously injured. If the large pile of stumps had not been burned just that morning, it would have contributed extra heat to the fire, heat that probably would have killed most of the people in the potato patch. 9. Mission Creek was not rebuilt after the fire except for the general store that operated on the former village site until the 1920s or 1930s. 10. The area was settled by farm families, who had to clear the land of massive stumps before it would produce any crops. One farmer, Alex Anderson who arrived in 1896, claimed that there were up to 400 stumps per acre and that they were so close together that he had trouble walking among them. Sources: One Hundred Years in Pine County and Pine County...and Its Memories by Jim Cordes

1. When the Point Douglas to Superior Government Road came through Pine County in the 1850s, a stopping place was established two and a half miles downstream from what would later become Rutledge. Stagecoach drivers stopped there to rest or change their horses and allow passengers to stretch and get something to eat.

2. In 1870, the Lake Superior and Mississippi Railroad founded the Kettle River station with a depot, water tank, wood yard, and two sections houses. It was the only station between Hinckley and Moose Lake.

3. Loggers soon discovered the stands of pine around Kettle River, which was soon home to the Folsom Mill, built in the 1870s. When the mill burned in 1892, it was replaced by the Rutledge Lumber Company mill, which at its peak, sawed up to three million board feet of lumber every year.

4. The Rutledge Lumber Company also constructed a post office, store, and houses for its employees.

5. On February 14, 1893, residents incorporated their little village of Kettle River, changing its name to Rutledge.

6. The Rutledge Lumber Company flourished for several years. In 1895, it claimed the record for the largest load of logs hauled by a four-horse team. This load consisted of 56 logs, which were stacked 26 feet high, measured 16 to 22 feet in length, and consisted of 37,120 board feet.

7. By 1906, logging was pretty much complete in the Rutledge area, and the Rutledge Lumber Company closed. The town quickly decreased in size as company employees moved on to different jobs.

8. In 1909, Rutledge had two churches (Catholic and Methodist), a general store, a saloon, and a population of 225 people. 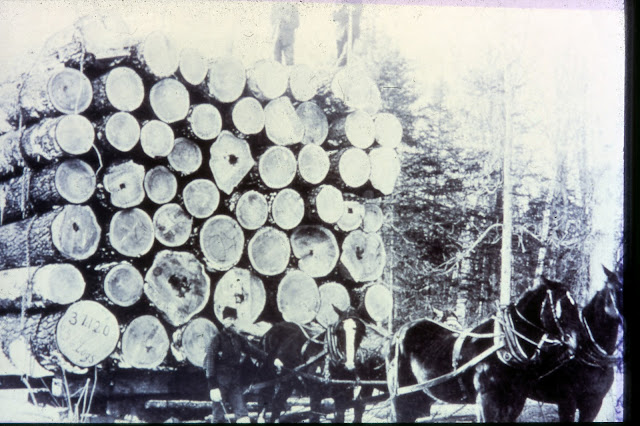 Rutledge Lumber Company's largest load of logs hauled by a four-horse team, 1895
Posted by Amy Troolin at 1:24 PM No comments: